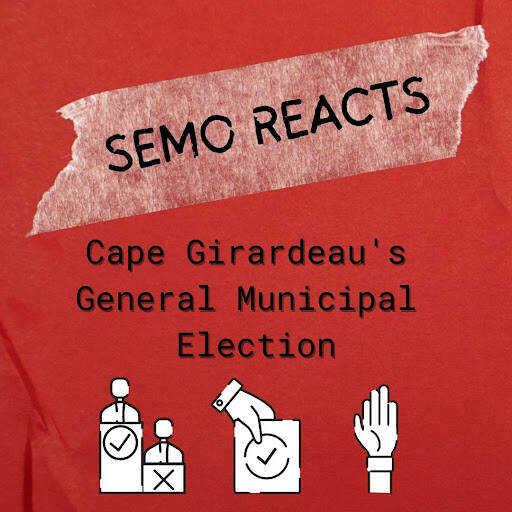 Cape Girardeau held its General Municipal Election April 5, 2022. Voters selected the positions of mayor, Ward 1 representative, Ward 2 representative and Ward 6 representative, as well as No. 63 School Board Member and County Public Health Center Board of Trustees.

“I’m very excited; it’s been something we’ve been thinking about and talking about and working for, for a long, long time,” Kinder said. “So that’s fun, but then the immediate thought is, ‘OK, let’s get to work.’”

Tameka Randle defeated Steve Watkins by 145 votes and has been elected as Ward 2 representative.

Junior entrepreneurship major Cassidy Klein said she was pleased with the overall outcome of the election.

“I’m actually pretty excited about how the overall election went,” Klein said. “There were six people that I was vouching for that I wanted on there, and we got four of them.”

Klein said she was indifferent to the outcome of the mayoral race because Kinder is a new face to the Cape Girardeau mayoral position, but she’s curious to see what she has in store for her term.

“She’ll say, ‘We’re gonna make it a safer Cape Girardeau,’ but how are you going to do that?” Klein said. “I mean, she hasn’t come out and said what her plan is.”

Junior social work major Kirsten Carr said she’s excited to see a woman in the mayoral position because it shows the Cape Girardeau community wants to create more diversity within our government.

“I’m really happy to see a newly-elected face, especially a woman, in office,” Carr said. “I look forward to seeing what she accomplishes during her term.”

Carr hopes Kinder will focus on all aspects of Cape Girardeau during her term. She said Kinder should try to make or bring in more family and community attractions, work to fix certain roads in Cape Girardeau and embrace younger people in our community by hiring more college and high school students to work for the city.

Most importantly, Carr said her main concern for the City of Cape Girardeau is safety. She hopes Kinder can improve on some of the city’s gun violence issues, referencing the incident at Legends apartment complex earlier this year.

Professor of art and design Bradley Phillips said he’s content with the overall outcome of the election.

“I’m interested to see what Dan [Presson] will do during this term,” Phillips said. “I feel like there could be a lot achieved for SEMO and the areas included in Ward 1 in this next four-year term.”

Phillips specifically mentioned the road conditions in Ward 1; he hopes Presson will work on some of the roads around campus to make it safer for pedestrians, cyclists and drivers.

He's especially happy to see more women on Cape Girardeau’s City Council, because he said it creates a more diverse opinion for the City of Cape Girardeau.

Associate director of athletics for external affairs Nate Saverino said he is excited for the newly-elected officials, because many of them have previous experience in public settings or as elected officials.

Saverino specifically mentioned his excitement for Stacy Kinder as the first female mayor in Cape Girardeau, and Dan Presson for being re-elected as Ward 1.

“I’m excited for Dan; Dan’s a great advocate for the university and for his citizens,” Saverino said. “[He] really understands the role that the university plays in the community and how important it is as an economic driver.”

When speaking about the overall election, Saverino said he’s eager to see what the next four years have in store for the newly-elected officials.

“Everybody that was elected was incredibly committed to Cape Girardeau,” Saverino said. “You can just tell whether it’s through elected public service in the past, or some sort of other public service that they are currently or have done in the past.”