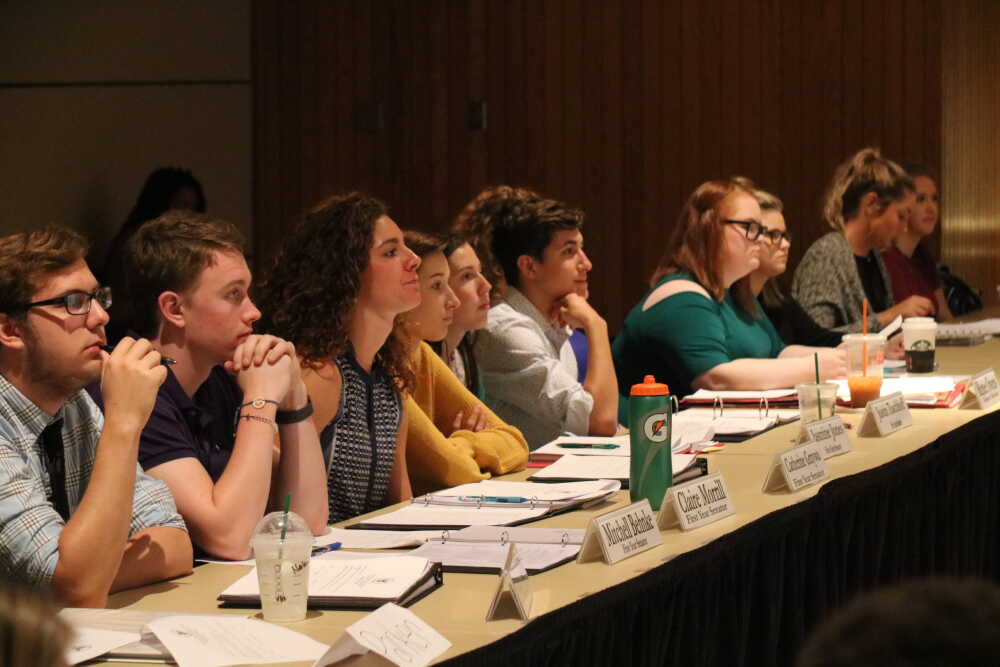 SGA Senators listen to a discussion on the budget during the Sept. 18, 2018 meeting.
Southeast Arrow File

The SEMO Student Government Association (SGA) plans to create more attainable goals and foster a more collaborative environment between their executive board and senators for the new year.

SGA president Joel Philpott said a primary goal is to work with other college representatives on their own goals instead of forcing the executive board’s projects on to the senators.

“I don't want to have the mindset that has been seen in the past where the exec [board] comes in with a whole bunch of projects and initiatives and they kind of just throw it to the senators — OK, you're gonna help us to complete this,” Philpott said.

“We're going to switch this year. How can the exec [board] help you guys create your goals? Because you guys are the representatives from your college, you have the closest ears to what people want. So we're going to let you create the goals,” he said.

Philpott said after the senators’ goals are established, the board will then see what resources can help fulfill the projects more quickly. He said he liked this approach better than establishing long term projects which “may not be implemented for two, three years down the line.”

He said SGA’s goal is to focus on “servant leadership:” what they can do for the university and its students.

“You're not here for yourself. Yes, it may look cool on a resume or anything like that,” Philpott said.

He said what employers will “ask you years down the line is, ‘What did you do?’ ‘What impact did you have?’ So, really just focusing on that aspect.”

Philpott then spoke about upcoming and ongoing projects and said he is excited to see what happens with the new dining plan coming to SEMO’s campus. He said the “new meal options sound delicious.”

Philpott acknowledged that students may not like the change, but might be surprised by the plan’s flexibility.

He said if they are not as hungry one week, and the eat more the next, “It allows them to kind of just pick and choose what they do.” He said there are also more options for a variety of diets to choose from.

Last semester SGA suspended the Student Activities Council (SAC) and created the Student Engagement Advisory Committee (SEA). Philpott said he believes the new committee will make it easier for students to throw events they’re interested in, and that they can join weekly SEA meetings to give feedback on what they’d like to see.

He said he thinks the process will allow students to get involved who normally wouldn’t have the time.

Philpott said he encourages anyone to get involved in whichever events they feel like. He credited going out and getting involved in events as part of the reason he is driven to be president now.

Philpott said it’s “something small,” to participate and to try things even if you don’t know if you will like them or not. “If it has somewhat of an interest to you, whether professionally or you just want to do it for fun, go for it.”

For those interested in joining SGA, all five first year senator positions are open. One representative seat is open for Holland College of Arts and Media and the other for the Harrison College of Business and Computing.

To learn more about SGA visit their SEMO webpage, or see them at the Aug. 20 Involvement Fair and Aug. 21 Welcome Back Picnic. SGA’s first meeting for the semester will be on Sept. 12, at 8pm.