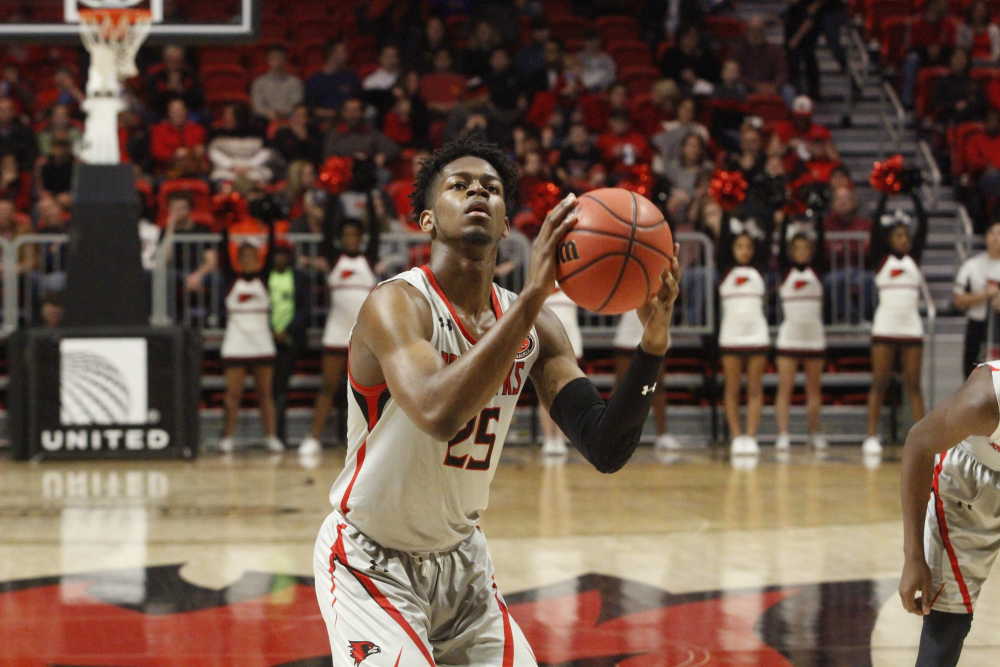 Sophomore guard Ledarrius Brewer shoots free throws in the second half of a 83-73 loss to SIU on Dec. 8.
Photo by Joshua Dodge ~ Photo Editor

The Southeast men's basketball team faced off with rival Southern Illinois on Dec. 8 at the Show-Me Center. The Redhawks kept it close for the first half, but the Salukis pulled away in the second half for an 83-73 victory.

This was the first game for the Salukis following the suspension of their leading scorer Armon Fletcher. The senior guard was suspended indefinitely for a violation of team rules.

The Salukis (7-3) did not appear to miss Fletcher, shooting 52 percent from the field for the game and a blistering 64 percent in the second half.

The Redhawks (5-5) could not contain SIU’s three-headed monster: senior guard Sean Lloyd Jr. and junior guard Aaron Cook went for 25 and 23 points, respectively, including 19 points in the second half for Lloyd; and senior center Kavion Pippen, a challenge all night on the inside, went for 18 points on 9-of-11 shooting. The Salukis outscored the Redhawks 32-16 in the paint.

Southeast stayed in the game by hitting the three ball. The Redhawks had 14 total for the game with nine coming in the second half. Sophomore guard Ledarrius Brewer was responsible for two of those three pointers and led the team in scoring with 17 points. Redshirt-junior guard Skyler Hogan was the only other Redhawk in double figures, coming off the bench to contribute 14 points. The bench as a whole contributed in a big way for the Redhawks as they outscored the SIU bench by a 33-3 margin.

The first half was a back and forth affair that saw eight lead changes and five ties. Southern Illinois was the aggressor early on, jumping out to a 9-3 lead and eventually pushing that to an 18-10 lead. Southeast then responded with a 10-0 run to take a 20-18 lead with nine minutes remaining in the first half.

Neither team was able to get a lead bigger than three for the rest of the half. The play of the night came with about five minutes left in the first half; Hogan missed a 3-pointer in transition but freshman forward Gabe McGlothan soared for a putback dunk over his own teammate and SIU senior forward Thik Bol, drawing a foul on Bol and tying the game at 28.

The teams traded offensive blows in the second half. Southern Illinois kept trying to pull away, but Southeast was able to keep it within single digits for much of the first 10 minutes of the second half.

At about the 10-minute mark, the Salukis were able to string together some defensive stops and start an 11-2 run that resulted in their largest lead of the night at 19 points, 69-50.

Southeast held Southern Illinois without a field goal for the final five minutes of the game but never got closer than nine points.

“We’re so young and inexperienced,” Ray said. “You look at their team and they got all seniors and juniors and our team is really immature. … We’ve got to be able to fight through that adversity and hopefully that is something we learn as we go through this non-conference season and get us ready for the conference season.”

With the loss, the Redhawks dropped to 46-70 in the all-time series with Southern Illinois, including losing 14 of the last 17 meetings with the Salukis.

The Redhawks will next be in action Saturday, Dec. 15, as they hit the road to face The Citadel.