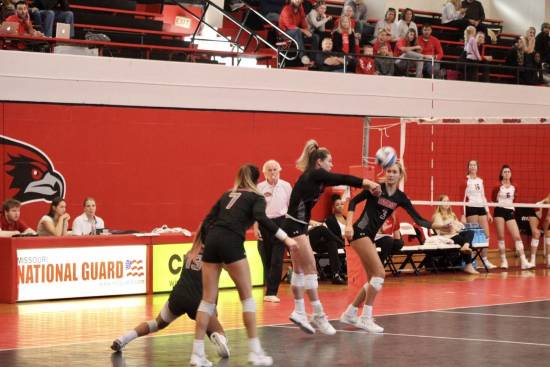 Senior outside hitter Mikayla Kuhlmann sets the ball in a match against second place Jacksonville State on Nov. 2 at Houck Field House. Kuhlmann led the team with 14 kills in the match.
Photo by Ramond Buck

In a battle between two of the top teams in the Ohio Valley Conference, the Southeast volleyball team defeated the Jacksonville State Gamecocks in four sets. Southeast won the first set 25-19, dropped the second set 25-19 and won the next two sets with scores of 25-20 and 25-23. Senior outside hitter Mikayla Kuhlmann led the Redhawks with 14 kills and sophomore setter Claire Ochs posted 45 assists to bring her total on the season to 926.

Kuhlmann said getting good contact on the ball was a big part of her 14-kill performance. She credited Ochs for setting the pace for the team offensively.

“Claire played phenomenal, as she always does,” Kuhlmann said. “I’m so incredibly thankful to have a setter like her. She does really well at controlling the tempo of our offense which allows us to get all of these kills.”

Along with her 45 assists, Ochs added six kills. The majority of her kills came on the second touch.

“I was just trying to be aggressive and get my hitters a good chance to get one less blocker on them,” Ochs said.

In the fourth set, Southeast held a 24-19 advantage but nearly gave the set away after a 4-0 Jacksonville State run.

“I think some of it has to do with the excitement to get that last match point,” Yankus said. “I think we really wanted that straight down kill and sometimes you just gotta be patient and find a way to score the point, it doesn’t need to be fancy.”

Yankus was pleased with the team’s serving and passing game in the victory.

“We did a really good job of serving [aggressively], getting them out of system, [forcing] them to be out of system and one dimensional,” Yankus said. “As we could get those little spurts of points, it was a lot to do with our serving.”

The Redhawks are back in action Nov. 7 and Nov. 8 when they host Austin Peay and Murray State.

“It’s a big weekend for us,” Ochs said. “I think we’re excited to have them here and protect home court.”

Yankus said the next two matchups will be very competitive.

“They’re two teams that have [finished] one and two in the conference the last couple years,” Yankus said. “The nice thing is we’re at home this time around so we’ve got the home-court advantage, and it’s going to be highly competitive.”

The win moved Southeast to 18-8 overall and 10-2 in the OVC. The Redhawks currently sit in first place in the OVC with four matches left in the regular season.