Tate selected as Editor for the Arrow 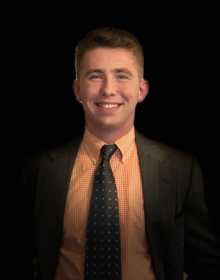 Southeast junior Zach Tate has been selected as the 2019-2020 editor-in-chief of the Arrow, the award-winning student-run newspaper, since 1911.

Tate, a native of Illiopolis, Illinois, currently serves as the Arrow’s sports editor and is double majoring in multimedia journalism and public relations with a minor in military science. He is also involved in multiple organizations serving as a project team leader for Riverfront PR and formerly a vice president of Theta Xi and platoon leader of the Show Me GOLD program.

“I am extremely proud to have been selected as next year’s editor-in-chief,” Tate said. “I cannot wait to see how far we take the paper next year.”

Tate has an outstanding year as sports editor. During the 2018 Southeast football season he traveled to two away games and was able to deliver in-depth stories, which involved multimedia that included photos and tweets. His tweets were delivered quicker than Southeast’s official football Twitter account, all while he was taking photos, preparing for post-game interviews and coordinating with staff back home to be the first with a story about the Redhawks’ football victory over Southern Illinois.

During the recent Missouri College Media Association Conference, he was elected as MCMA president for the 2019-2020 academic year. As president Tate will be responsible for coordinating the next conference, which will be held at Southeast April 3-4, 2020.

The Arrow has a had a successful year winning 13 awards at the MCMA Conference and seven awards at the Associated College Press/College Media Association Fall National College Media Convention. Tate plans to continue to produce award-winning content for the upcoming academic year.

“Something that I want to do moving forward is deliver our news like other outlets deliver theirs,” Tate said. “We really want to shift toward a truly digital- first format, putting more emphasis on good photos and timely stories, and incorporating a lot more video into our news delivery.”