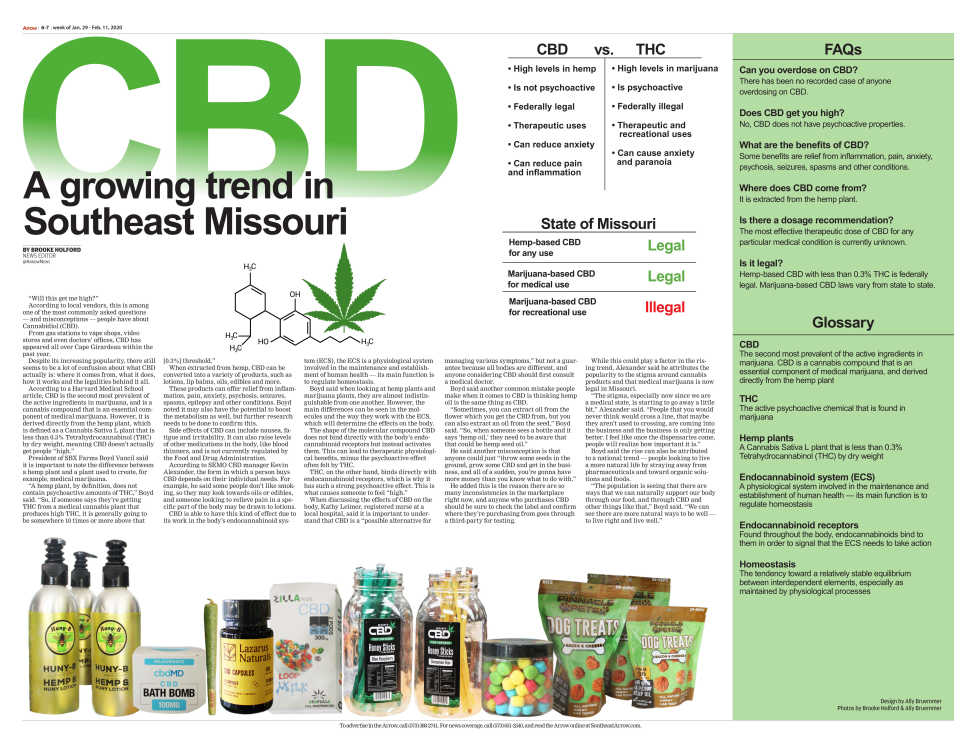 “Will this get me high?”

According to local vendors, this is among one of the most commonly asked questions — and misconceptions — people have about Cannabidiol (CBD).

From gas stations to vape shops, video stores and even doctors’ offices, CBD has been all over Cape Girardeau within the past year.

Despite its increasing popularity, there still seems to be a lot of confusion about what CBD actually is: where it comes from, what it does, how it works and the legalities behind it all.

According to a Harvard Medical School article, CBD is the second most prevalent of the active ingredients in marijuana, and is a cannabis compound that is an essential component of medical marijuana. However, it is derived directly from the hemp plant, which is defined as a Cannabis Sativa L plant that is less than 0.3% Tetrahydrocannabinol (THC) by dry weight, meaning CBD doesn’t actually get people “high.”

President of SBX Farms Boyd Vancil said it is important to note the difference between a hemp plant and a plant used to create, for example, medical marijuana.

“A hemp plant, by definition, does not contain psychoactive amounts of THC,” Boyd said. “So, if someone says they’re getting THC from a medical cannabis plant that produces high THC, it is generally going to be somewhere 10 times or more above that [0.3%] threshold.”

When extracted from hemp, CBD can be converted into a variety of products, such as lotions, lip balms, oils, edibles and more.

These products can offer relief from inflammation, pain, anxiety, psychosis, seizures, spasms, epilepsy and other conditions. Boyd noted it may also have the potential to boost the metabolism as well, but further research needs to be done to confirm this.

Side effects of CBD can include nausea, fatigue and irritability. It can also raise levels of other medications in the body, like blood thinners, and is not currently regulated by the Food and Drug Administration.

According to SEMO CBD manager Kevin Alexander, the form in which a person buys CBD depends on their individual needs. For example, he said some people don’t like smoking, so they may look more towards oils or edibles, and someone looking to relieve pain in a specific part of the body may be drawn to lotions.

CBD is able to have this kind of effect due to its work in the body’s endocannabinoid system (ECS), the ECS is a physiological system involved in the maintenance and establishment of human health — its main function is to regulate homeostasis.

Boyd said when looking at hemp plants and marijuana plants, they are almost indistinguishable from one another. However, the main differences can be seen in the molecules and the way they work with the ECS, which will determine the effects on the body.

The shape of the molecular compound CBD does not bind directly with the body’s endocannabinoid receptors but instead activates them. This can lead to therapeutic physiological benefits, minus the psychoactive effect often felt by THC.

THC, on the other hand, binds directly with endocannabinoid receptors, which is why it has such a strong psychoactive effect. This is what causes someone to feel “high.”

When discussing the effects of CBD on the body, Kathy Leimer, registered nurse at a local hospital, said it is important to understand that CBD is a “possible alternative for managing various symptoms,” but not a guarantee because all bodies are different, and anyone considering CBD should first consult a medical doctor.

Boyd said another common mistake people make when it comes to CBD is thinking hemp oil is the same thing as CBD.

“Sometimes, you can extract oil from the flower which you get the CBD from, but you can also extract an oil from the seed,” Boyd said. “So, when someone sees a bottle and it says ‘hemp oil,’ they need to be aware that that could be hemp seed oil.”

He said another misconception is that anyone could just “throw some seeds in the ground, grow some CBD and get in the business, and all of a sudden, you’re gonna have more money than you know what to do with.”

He added this is the reason there are so many inconsistencies in the marketplace right now, and anyone who purchases CBD should be sure to check the label and confirm where they’re purchasing from goes through a third-party for testing.

While this could play a factor in the rising trend, Alexander said he attributes the popularity to the stigma around cannabis products and that medical marijuana is now legal in Missouri.

“The stigma, especially now since we are a medical state, is starting to go away a little bit,” Alexander said. “People that you would never think would cross a line, that maybe they aren’t used to crossing, are coming into the business and the business is only getting better. I feel like once the dispensaries come, people will realize how important it is.”

Boyd said the rise can also be attributed to a national trend — people looking to live a more natural life by straying away from pharmaceuticals and toward organic solutions and foods.

“The population is seeing that there are ways that we can naturally support our body through our food, and through CBD and other things like that,” Boyd said. “We can see there are more natural ways to be well — to live right and live well.”