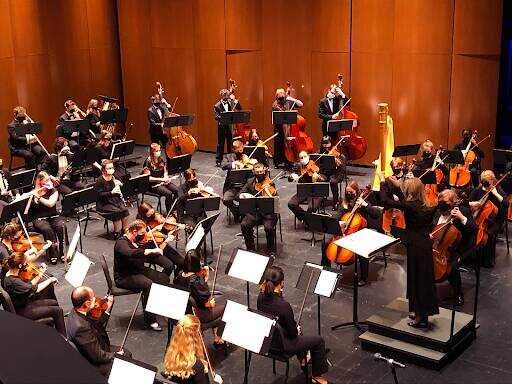 The Southeast Symphony Orchestra performs a selection from “Carmen Suite No. 1” on Oct. 12 in Bedell Performance Hall, moments before the audience rewards them with a standing ovation. Dr. Vargas attends the performance after announcing the college’s award for excellence.
Photo by Olivia Tock

If you did not attend the Symphony Orchestra concert last Tuesday night, you not only missed out on a narrative musical performance, but also a surprise visit from Dr. Vargas.

On Oct. 12, the SEMO Symphony Orchestra opened the Gala Season at River Campus with a concert featuring a rendition of the classic orchestral tone poem “Peter and the Wolf” and selections from other famous pieces like “Four Characteristic Waltzes” and “Carmen Suite.” Before the music began, University President Carlos Vargas took the stage to share some news.

Vargas introduced the district manager of the Institution Solutions Group of Yamaha, Kirk Davis, whose job is to help colleges and universities infuse technology into music education. Davis announced that the Holland College of Arts and Media has received the Yamaha Institution of Excellence Award, which is given to institutions that demonstrate a commitment to innovation in music study. Vargas said SEMO is the first of 10 schools receiving the award across the nation.

SEMO and Yamaha have been partners for three years, and last year, SEMO was given more than 40 pianos from Yamaha for excellence as an institution in music and technology. Vargas said the relationship between the university and Yamaha is an important one.

“At the time they came and visited our facilities and met our faculty, our students, they were very impressed with the quality of the programs here,” Vargas said. “And so, they actually started thinking about the idea of establishing an award for certain schools that have certain standards in terms of equality, that use their instruments.”

Many of the students who utilize the Yamaha instruments perform in the Symphony Orchestra and were surprised by the announcement from Vargas. Percussion performance major Ethan Brown performed in the concert and said it was a “really, really cool thing” to receive the award from Yamaha..

“I also did not know that Dr. Vargas was coming to speak; I just knew Yamaha was giving us you know … something,” Brown said. “So I thought that was really, really neat, and then I hope he stayed for the concert, because it was a good one.”

Flute performance major Anthony Kandilaroff said SEMO was the first school to get the Yamaha pianos, and were given another award last year.

“Tonight was a special night because it was also Yamaha’s birthday,” Kandilaroff said.

The Symphony Orchestra lived up to this award of excellence — its three-piece performance ended with a standing ovation from a packed audience.