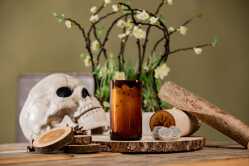 Principles of entrepreneurship students get more than a taste of real-world experience, as they’re tasked with starting and running their own business for one semester. This fall, Steven Stovall’s section of ER361 started a sustainable candle and wax melt business, SEMO Scents. There is one catch for the group: They were given $200 by the chair of the management department Kevin Dickson and must return $400 by Nov. 23.

“[The extra money is expected] just as a real investor would expect a return on the investment into a startup,” Stovall said.

Stovall’s class is also competing with Ed Crowley’s section of the course, who are planning sports and esports events as their business venture. Whichever section makes the most profit wins. Stovall is confident in his class’ ability to win and said the winner receives a cookout dinner at the end of the semester along with “bragging rights.”

Stovall’s role in the business is “very hands-off,” as the project is designed for students to get real-world experience as entrepreneurs. Within the first two weeks of class, students in Stovall’s class decided on candles and wax melts for their business. Then, like a real company, the class separated into three divisions — operations, marketing and finance.

VP of operations committee Catherine Grzywa said her team spent a lot of time researching and “stalking” Etsy accounts before producing their candles.

“I learned a lot of things can go wrong with candles,” Grzywa said. “Some essential oils aren’t meant to go into candles, and that can create a bonfire effect. But once you figure out all the stuff you can’t do, it becomes very easy.”

The group decided on a mix of paraffin and soy wax for their products with essential oils to create four unique scents: tea time, haunted forest, certified lavender boy and apple pie. Tea time products focus on the scent of mint among complementary scents, while haunted forest products use the strong aroma of black oak. One candle costs eight dollars, while a three-pack of wax melts costs five. 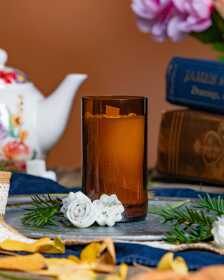 Instead of buying glass containers, operations team member Mackenzie Beaman gathered discarded beer and wine bottles after her shifts at Top of the Marq to be used for the candles. With label removal, glass cutting and sanding, Grzywa said the recycled bottles create a “rustic look” and could also be used by customers as drinking glasses if cleaned after the candle is burned.

VP of marketing committee Emna Safraoui and her team had the task of branding and selling SEMO Scents’ products. Safraoui said there are students with multiple talents on the team, ranging from photography to design to communications.

“Our team is so diverse,” Safraoui said. “Everyone is giving their touch on the product. Everyone is putting so much energy into it.”

The marketing committee recently set up Facebook and Instagram accounts for SEMO Scents, where people are already reaching out to place orders. Multiple businesses, including Citizens Bank of Charleston, have placed orders for SEMO Scents homemade candles and wax melts.

“[There is a] lot of demand for the product,” Safraoui said. “We didn’t expect that many people to buy it in such a [short] amount of time.”

VP of finance committee Blake Cisneros said his team’s primary jobs include recording all revenue made by SEMO Scents, approving purchases made by other committees and creating a sales price and profit margin for the product sold. 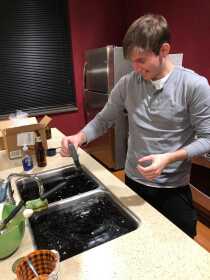 Principles of entrepreneurship student prepares and cleans glass bottles to be used for SEMO Scents candles. Each glass is cut and sanded so customers can later reuse them as drinking glasses.
Photo illustration submitted by SEMO Scents marketing team

“Being able to get enough resources and turn them into a profit is the [biggest] challenge that we are facing,” Cisneros said.

Stovall is optimistic about SEMO Scents and the future of the entrepreneurship class. If students continue to return profits with their businesses, the department hopes to use the money as scholarship or “seed money” for student entrepreneurs in the future.

“​I have been absolutely amazed how the students took a vague, ethereal idea and made it into a reality,” Stovall said. “From brainstorming on a whiteboard in the classroom to getting multiple orders — some for 100 candles — in just a matter of weeks. It’s quite impressive.”