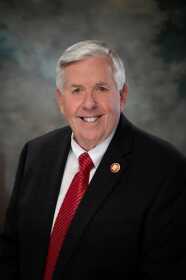 Gov. Mike Parson gave his State of the State address on Wednesday , January 19, 2022. Parson spoke on a variety of topics such as investing in higher education, vaccination rates, infrastructure projects and much more.
Photo courtesy of Office of Missouri Governor Mike Parson

With a historic budget surplus and federal funding, Parson outlined plans to invest in higher education and other projects across Missouri. He proposed investing a total of $600 million across higher education institutions with $470 million to fund top capital improvement projects.

Gov. Mike Parson presented his plan during the 2022 State of the State address at 3 p.m. on Wednesday, Jan. 19.

Parson also proposed a $20 million investment into area career and technology centers across the state. Students attending the Cape Girardeau Career & Technology Center, where SEMO and other area colleges offer courses, would benefit from the funding.

CCTC students Nicholas Hodges, Lydia Strickland and Anwyn Suhr attended Parson’s address. Parson recognized them as examples of students who would benefit from the funding.

Beyond his educational initiatives, Parson also praised his administration’s response to COVID-19, stating 75% of all Missourians over age 18 had received a vaccine and 94% over the age of 65 were protected from the virus.

Parson also proposed spending hundreds of millions of dollars on infrastructure projects such as wastewater management, storm water systems, updated bridges and roads — among other areas. He proposed to spend $400 million to expand broadband to rural and underserved urban communities.