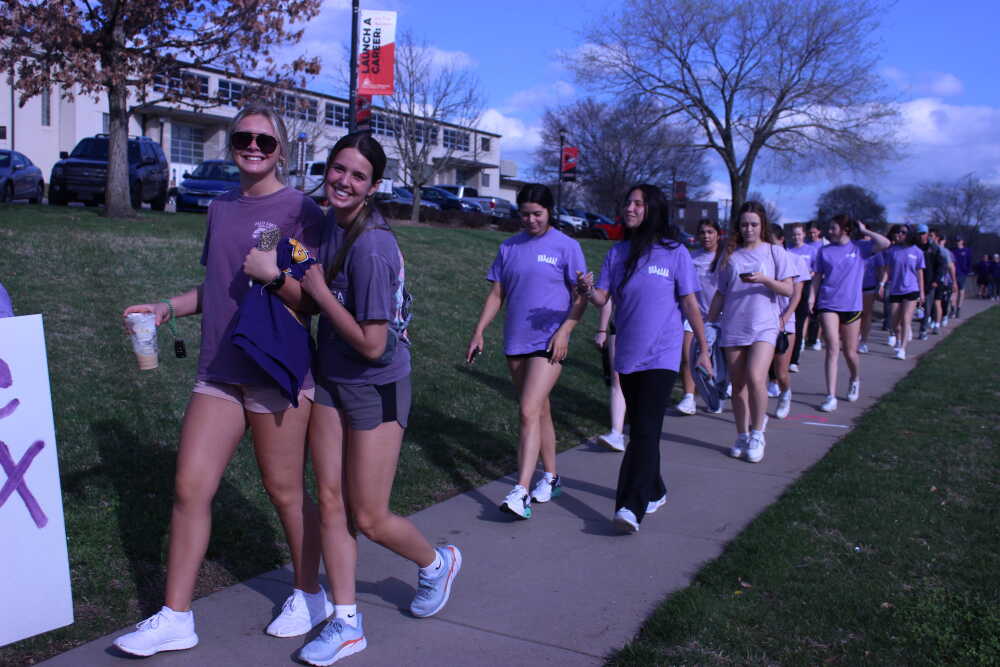 Greek students walk along Broadway Street at the annual Walk a Mile in Their Shoes event on Tuesday, April 5. The event is part of Greek Week.
Photo by Kate Haussman

The annual “Walk a Mile in Their Shoes” Greek Week event raises awareness about sexual violence on the SEMO campus. At the event, students of Greek Life walked a mile around the SEMO campus and watched a Greek Connections presentation.

SEMO's Greek Week is a yearly event in which each Greek chapter joins together to make a change in the community. This year's event takes place from April 3 through 10.

Family studies senior Liz Gaumer was the lead organizer for the Walk a Mile event and said Greek Week combined IFC [Interfraternity Council] and Panhellenic Greek Life, and they will be walking together with their pairings for Greek Week.

“I think it is great we are able to walk together as a group, since last year, we had to walk in different groups because of COVID,” Gaumer said.

Students began their walk at Academic Hall and continued down Pacific Street onto Broadway Street and then back up Henderson Avenue to end at Academic Hall. The distance of the walk was one mile, and approximately 1,000 Greek Life members participated.

The students participating dressed in purple, the color associated with raising awareness about domestic violence. The participants cheered, laughed and held up signs decorated with purple markers with phrases such as “I stand with her” and “Prevent sexual assault” as they walked.

Communication disorders junior Peyton Mattingly said the walk was a great way for the entirety of Greek Life to gather and express their feelings about sexual assault.

“[The walk] spreads light on a difficult topic to touch on and helps people understand the severity of it,” Mattingly said.

The members of Greek Life were also given a Greek Connections presentation before the walk covering the prevention and effects of sexual violence from nurse practitioner Carrie Dudley.

The Greek Connections program, which used to be called “Minimum Standards” for fraternities and sororities, improves the Greek Life experience at SEMO by approving the plans of curtain events, like presentations.

Dudley’s presentation included three main points: prevention, trauma and what SEMO students can do to limit the risk of sexual violence. She also touched on a few statistics during the presentation.

Dudley provided many tips to help limit the risk of sexual assault, including limiting drug and alcohol use, always using the buddy system, and carrying some form of protection or whistle.

Dudley said the best way for the SEMO community to help stop sexual violence as a whole is “if you see something, say something.”

The Walk a Mile in Their Shoes event was started in 2014 to raise awareness for survivors of rape, sexual assault and gender violence. The event also works to help prevent these occurrences from happening on the SEMO campus.

For help or resources for those who have experienced sexual assault, call or visit SEMO’s Campus Violence Prevention Program at (573) 986-6899.