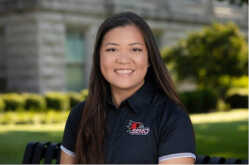 Jennifer Tenholder poses for staff photos in front of Academic Hall. Tenholder is a student ambassador in the Office of Admissions.
Photo by Jacob Wiegand

Throughout the years, information technology and cybersecurity have always been a male- dominated workforce. In recent years, the number of women in the industry increased the workforce by 20 percent since 2019, according to cybercrimemagazine.com.

“I believe that only 25 percent of I.T., overall, is female and I am Asian and only five percent overall of the people working in I.T. are Asian females, so I think being able to represent my team in such a public way really helps to bring up the representation and it shows all these girls that are coming into cybersecurity that there is nothing to be afraid of,” Tenholder said.

“I was determined to be on the SEMO team, and now I am team captain, and so I really think that helped with going in as team captain this year because we were going for our tenth straight win and in my mind I got the mindset that we are going to win this tenth straight win so I spent hours developing a training program, and talking to old alumni to figure out the best possible strategy to help us win which we luckily did,” Tenholder said.

Cutline: Jennifer Tenholder, poses for staff photos in front of Academic Hall. Tenholder is a student ambassador in the Office of Admissions.

Tenholder is a senior majoring in cybersecurity and minoring in computer science and computer networking. She is originally from Florissant, Mo.

Tenholder said the moment she really knew that she loved I.T. and Cybersecurity was during her first computer science courses in college.

“The first assignment for that class we had to write about security vulnerabilities in Java and I started doing research in all the security of what can happen and how to stop it and as I was writing this paper I just kept going and going and I didn’t want to stop and that was the moment that I really realized that this is what I want to do,” Tenholder said.

Tenholder said her determination and networking led her to high accomplishments in college.

“The reason I have been able to succeed so far is because I am so determined, and I do not give up on things. So, in high school, I was taking AP’s and almost in every honors society, and when I got to college, I immediately made connections in the office of admissions where I also worked. I also made connections with our cybersecurity team,” Tenholder said. “Then I just poured myself into my schoolwork and learning, and I think that’s what led me to being captain and that also led me to getting my internships.”

After completing two internships in her sophomore and junior year with the Federal Reserve Bank of St. Louis, Tenholder received a job offer to work full-time on their information security team.

Before being elected for captain, Tenholder went through a period of being fearful of if she was able to fulfill that position.

“Oh, I was very nervous, because I don’t want to bring gender into it, but I am one of the first female captain that the team would have and I had only been on the team for two years, so I was really worried going in that I wasn’t going to be good enough for the team,” Tenholder said.

The Cyber Defense team chose Tenholder as their captain by her skilled experience and the knowledge she gained with the team over the years.

“Typically, I think it's whoever wants to step up and take it and then the team captain will look at those and see who has the skills and the will power to lead the team,” Tenholder said.

Tenholder said she was so thrilled then she found out she was elected to be captain for her Cybersecurity Defense Team.

“To be able to play a part in history like that I was amazed and I was happy for like 5 minutes and then I realized oh my goodness we are going for our tenth straight win and I am terrified thinking how am I going to do this,” said Tenholder. “It was an unreal feeling honestly and it felt great knowing I had my entire team standing behind me saying I could do this and that they believed that I could do this.”

Tenholder said that she does not have a role model but what keeps her motivated to keep doing well is that she wants to become other’s role model eventually someday because of the lack of representation.

“One of the best moments of my life is when my younger sister that is two years younger than me expressed while driving home that her teacher asked her who her role model is between our parents that she looks up to most and she told them I don’t look up to my parents most I look up to my older sister and I want to be like my older sister,” Tenholder said.