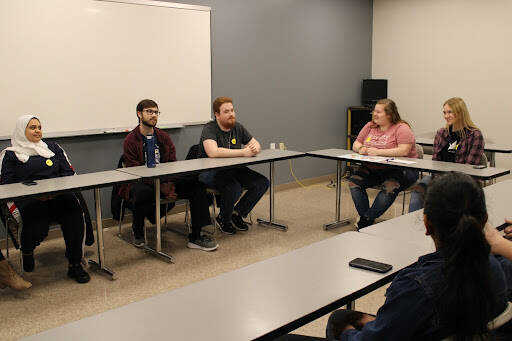 English Club participants discuss one of the questions of the week, “describe your hometown” in the multipurpose room at International Village. Students go around the room and answer a few questions to practice their English and learn more about other cultures.
Photo by Olivia Tock

Many college graduates anticipate leaving their university to start a new life and career. But for one Southeast alumna, college became a forever home away from home, for both herself and many international students she has helped through her work.

Hayley Sidwell graduated from SEMO in 2020 with a major in family studies and a minor in psychology. But instead of returning home to Dittmer, Mo., or finding employment elsewhere, Sidwell became a missionary for the campus ministry Chi Alpha, as well as its international director.

Sidwell was welcomed to Chi Alpha as a freshman and said she developed a stronger relationship with God after finding love and friendship in the ministry. These experiences unknowingly led to the development of English Club. Through a friend in Chi Alpha, Sidwell was introduced to a small group of international students. She got to know them very well, and they quickly became close friends. From there, she started meeting more international students.

“Some of my closest friends in college were international students, and they really just taught me a lot about life that I wouldn’t maybe see from my worldview,” Sidwell said. “I also find [our friendships] to be really adventurous, even in the midst of being in Cape Girardeau.”

English Club founder Hayley Sidwell discusses her passion for international students at Rust Media Center. She said she already had international friends in college and wanted to continue to help them, even after graduation.
Photo by Olivia Tock

With graduation approaching and the pandemic in full swing, Sidwell did not know what her role as an on-campus international missionary would look like. But her goal was to find the needs of the students and fill those needs. Sidwell said that became the birth of the English Club.

English Club started in January 2021 and is a culmination of ideas from various Chi Alpha chapters throughout the country. Throughout her four years at SEMO, Sidwell attended many Chi Alpha conferences and events, where she made friends who had an international focus in their own ministries. Sidwell wanted to do the same, so once SEMO Chi Alpha established SEMO Chi Alpha International, English Club was inevitable. So, Sidwell reached out to Assistant Director of International Student Services Dr. Brooke DeArman and pursued a solution that she said might be helpful to international students: learning conversational English.

Through English Club, both domestic and international students have found a place of friendship while immersed in various cultures. Balu Nalluri, who is completing his Master’s degree in computer science, said English Club is a place where he can proudly speak about his home, India, and practice his English, too.

“It gives you a chance to speak — I love that most,” Nalluri said. “It gives me new friends — new internationals and some American friends. We discuss cultures. … That’s the good part.”

Mohammed Murriky, an industrial engineering major from Saudi Arabia, loves coming to English Club to make friends and learn about other cultures.

But international students aren’t the only ones who can find friendship and learn about the world at English Club. Jacob Weidenbenner, an outdoor recreation major, is a domestic student from Waterloo, Ill., whose favorite part of English Club is playing ping pong and trying new dances and foods from other places.

“We did a potluck at the end of the year last year, where we just had food from Pakistan, India, Saudi Arabia, Japan, America, obviously — but just a ton of culture stuff,” Weidenbenner said. “We ended up doing an Indian wedding dance at the end of it. We would run around in circles, throwing our hands in the middle, just a party. It was a lot of fun.”

Sidwell said sometimes, it is easy for international students to be overlooked, and it can be hard for them to make friends, which for American students can be just as troublesome. Sidwell’s own journey of genuine friendship and love for international students at SEMO is reflected through English Club, a place, she said, that is for anyone to make friends, no matter where you are from.

English Club meets on Fridays at 1:30 p.m. at the International Village. Follow English Club on Instagram to learn more.