Take a trip to International Village on SEMO’s campus, and you will find students from all over the world, from India and Ukraine, China and Nepal, Russia and Japan. These countries are familiar to most Americans and have large populations of students attending SEMO. But some countries represented at SEMO are often overlooked.

It can be difficult to find a home away from home as an international student, but it is especially challenging when one has no one from their country to connect with in a foreign land. Alfredo “Aldo” Vandeling Mau, is from Dili, Timor-Leste, Elvis Maina, is from Nairobi, Kenya, Marie Diagne, is from Dakar, Senegal and Mohammed Osman, who lived in Riyadh, Saudi Arabia but is from Khartoum, Sudan. These are some of the students representing their home countries that have the smallest populations at SEMO. Meet each of these students and find out what it is like to come to Missouri with little to no community, thousands of miles away from home. 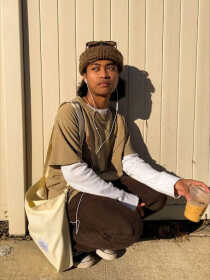 Vandeling Mau is a junior studying public health and he offers a unique perspective on studying in a foreign country: He is the first and only student from Timor-Leste to attend SEMO.

Vandeling Mau said he is an extrovert and has always been able to make friends. He has many different friend groups and is involved in several organizations on campus, especially the International Student Association, where he was recently elected vice president. Vandeling Mau said he has experienced covert racism, or subtle micro-aggression, while living Cape Girardeau, and he hopes his position as vice president will help communicate the need for better understanding and recognition of international students and allow this group to be more involved with other student organizations.

“I just hope we will do something more for international students here at SEMO that help people recognize and acknowledge our existence here and just to get this community to be respectful and open-minded and interested in learning about other people’s lives and their stories,” Vandeling Mau said. “Someone like me who came from a different country, I feel so privileged that I get to experience and learn a lot about America — to have a different perspective, and I grow a lot — I just wish people here had this mindset that want to be more open and learn about other people, because it will benefit you a lot, and you will grow more wiser, educated and smarter to learn from other people.”

Vandeling Mau said he misses his mom’s Indonesian cooking and eating gorengan, a fried street food. He said recently, while living in Cape Girardeau, he started watching mukbangs, video shows that involve the host eating various foods, which makes him miss his favorites. 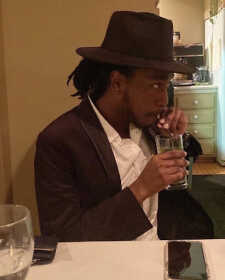 Elvis Maina is a senior studying mechanical manufacturing systems engineering. He is from Nairobi, Kenya, a country in East Africa, and is one of three Kenyan students/faculty represented at SEMO.
Photo submitted by Elvis Maina

Maina is a senior studying mechanical manufacturing systems engineering and had been one of three students from Kenya when he first came to SEMO in Fall 2018. But since then those students graduated–the first in Fall 2018, and the second in Fall 2019–and he was the only one left. However, a new student from Kenya arrived this year, but he has not met her yet. There is also a faculty member, Millicent Odhiambo, director of the Center for Behavioral Health and Accessibility, who is from Kenya.

Maina said he is an introvert, and it was difficult at first to make friends. He is not involved in any organizations, because he is busy with work at International Village and classes. He is mostly friends with other students from African countries, but he has American friends, too.

Many international students have siblings who also travel overseas, but for Maina, his parents were the ones going abroad. His parents moved to Canada in 2020, right before the COVID-19 pandemic began, so they share an understanding of moving to a completely different culture..

“It’s not just me sharing my experience here; they can kinda understand how I feel,” Maina said. “It’s new for them, too; it’s nice to have that person feeling the same experience as you.”

Maina said he misses eating ugali, which is similar to a bland cake made of water, salt and maize flour that is eaten with meat. He also loves chapati, similar to naan bread, but without garlic; his mother makes it with carrot for flavor. There are no Senegalese restaurants nearby, so Maina visits his friend in Seattle to eat his favorites. 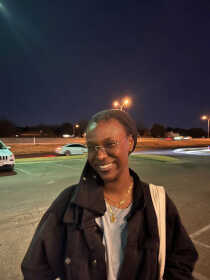 Marie Diagne is a junior studying psychology. She is from Dakar, Senegal, a country in West Africa, and is the only Senegalese student represented at SEMO.
Photo submitted by Marie Diagne

Diagne is a junior studying psychology and is the only student from Senegal at SEMO, but has an uncle in New York, which has a large Senegalese population. She also has an older brother who lives in Mississippi. Diagne went to an international high school that taught English, but her brother did not, so they had two very different experiences when they first came to the U.S.

“He came two years before me, but it was weirder for him, because he didn't know any English when he moved here, while I did; I was already fluent when I came,” Diagne said. “He was not having it — he was not talking to people — he was being a hater, just glaring at people for a year.”

Diagne joked about her brother, but was serious when she said how much of a different experience it was for the two of them. She said it can be difficult to make friends without communication.

Diagne said she is an introvert, and it was difficult at first to make friends at SEMO. She is not involved in any organizations, but attends many events and helps out occasionally with the African Student Association (ASA). Because she speaks French, Diagne is able to communicate and connect with other students who are from countries where French is spoken, which has made it easier to relate to others. Her roommate is from Japan and has a minor in French. Communicating with one another has helped Diagne find community because of their shared experiences.

Diagne, like Vandeling Mau, said she has also experienced micro-aggressions while living in Southeast Missouri, such as people asking her if she has ever seen a lion. Diagne loves working at International Village, where despite the subtle racism she faces, she always has a group of people who she said “doesn’t make you feel like the other.” She wishes other organizations and groups on campus would do the same for international students.

Diagne said she misses eating all Senegalese foods. She used to have a favorite food, but because of the limited number of Sengalese restaurants nearby, she can only eat it unless she goes to Memphis, Tenn., since that has the closest Senegalese restaurant. So for now, all the food from her culture is her favorite, especially rice-based meals. 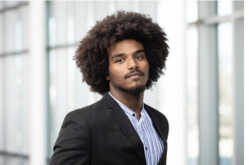 Mohammed Osman is a senior completing his bachelor’s degree in cybersecurity. He is from Sudan, a country in North Africa, and is one of three Sudanese students represented at SEMO.
Photo submitted by Mohammed Osman

Osman is a senior from Sudan studying cybersecurity. His older brother attended SEMO first, and he followed shortly after with a friend. Now, his brother has graduated, but Osman’s younger sister began her study at Southeast not long after, so there have always been three Sudanese students at SEMO for as long as Osman has attended.

Osman said he is an extrovert and has always been able to make friends by joining organizations like ISA, ASA and the Muslim Student Association (MSA) and working at International Village. Osman said one of the hardest parts about living in Cape Girardeau is not having the same recognition and celebration for his culture’s holidays. He said things that are a big celebration back home don’t have holidays associated with it here in the U.S.

“Yesterday was actually Eid. Eid is a Muslim holiday that sort of concludes a month-long fast, where Muslims fast from sunrise to sunset,” Osman said. “So that is, back home, a festivity that is a holiday for two weeks, but for me, it was just a regular day, and I tried to celebrate it as much as possible, but at the end of the day, you wake up, you're going to class, you’re going to work, life doesn't stop — it’s one of the major difficulties — to find time to still enjoy both the culture and holidays here, but enjoy your own, as well.”

Osman said his family sometimes sends him food from back home if he asks. He said his mother sends him treats and snacks he normally wouldn’t be allowed to eat at home, but because he is studying abroad, it is a special occasion.

All four students had unique experiences with culture shocks and adjusting to Cape Girardeau nearly all alone. But they also have commonality, too. They all had ideas about the United States before coming here, from watching American films and shows. Food is important for most of them, and it is difficult to find ingredients to create their favorite dishes from back home. Osman said even when they can, or if they go to a restaurant that sells Sudanese food, it usually doesn’t taste the same. One way Osman finds community at SEMO while maintaining his culture is through sharing food.

Osman said, “We all know we want to be together at the same place every weekend, so we divide it where every country [in the friend group] will all share a dish once a week or once every two weeks. We all get together and chip in for the groceries and all that and try to replicate those dishes.”

Music is also important for all four students. Maina, Diagne and Osman said they listen to music from their country every day to feel connected to their culture. Religion, traditional clothing and dancing also keep these students tied to home. All four students live in big cities, so coming to a smaller place with no public transportation was a shock. Maina said he was surprised by how Americans handle pedestrians and traffic.

“For example, when you’re crossing the street, people actually stop by and let you cross the street even before a crosswalk — back home, you can’t do that; it’s basically run for your life,” Maina said. “But here, everybody is just so polite.”

One may feel like a stranger coming to a different country, but there is one thing that holds us together: There is no place like home.