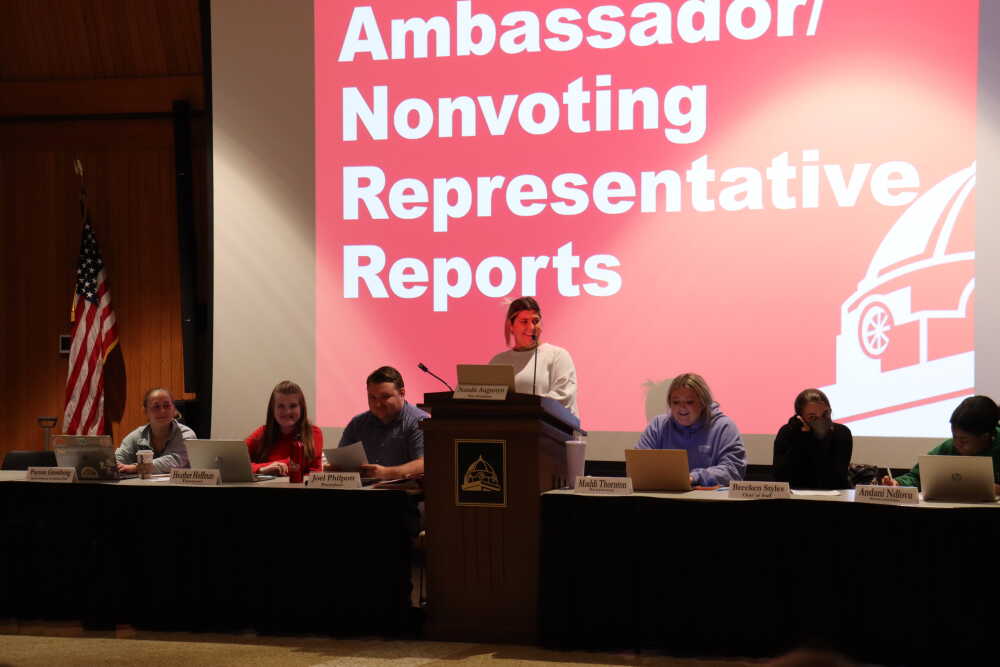 SGA Vice President Natalie Augustyn hears reports by fellow members of the SGA senate. Part of the role of the Vice President is to lead meetings and keep them on time.
Photo by Koki Lynn

During the Nov. 21 Student Government Association (SGA) meeting, a by-law regarding committee selection was changed, two new SEMO organizations were approved and discussion of the Nov. 26 SEMO football playoff game was held.

One of the many responsibilities of SGA is the formation of committees which put together resolutions and allocate funding. This week, the SGA made a change to the by-law detailing how Dr. R. Ferrell Ervin Excellence In Teaching selection committee members are selected.

Originally, the by-law called for five students from different academic colleges to be part of the committee. SGA president Joel Phillpott said that the change was similar to the one presented last week, but that the wording would change from colleges to departments.

The resolution passed, and the wording now reads, “five members having majors from different departments.”

The applications were approved, allowing both to gain official organization status at SEMO.

Finally, a discussion was held about the upcoming playoff game for the SEMO Redhawks football team. A bid was placed by both SEMO and the University of Montana to host the game.

Augustyn said the original resolution was designed to approve funding for tickets to the home game, however, since SEMO was unable to secure the bid, the resolution was no longer necessary. The game is set for Nov 26, being hosted in Montana and streamed on ESPN2 where the Southeast Redhawks will be facing off against the Montana Grizzlies.