Is it worth the buzz? SEMO students discuss vaping 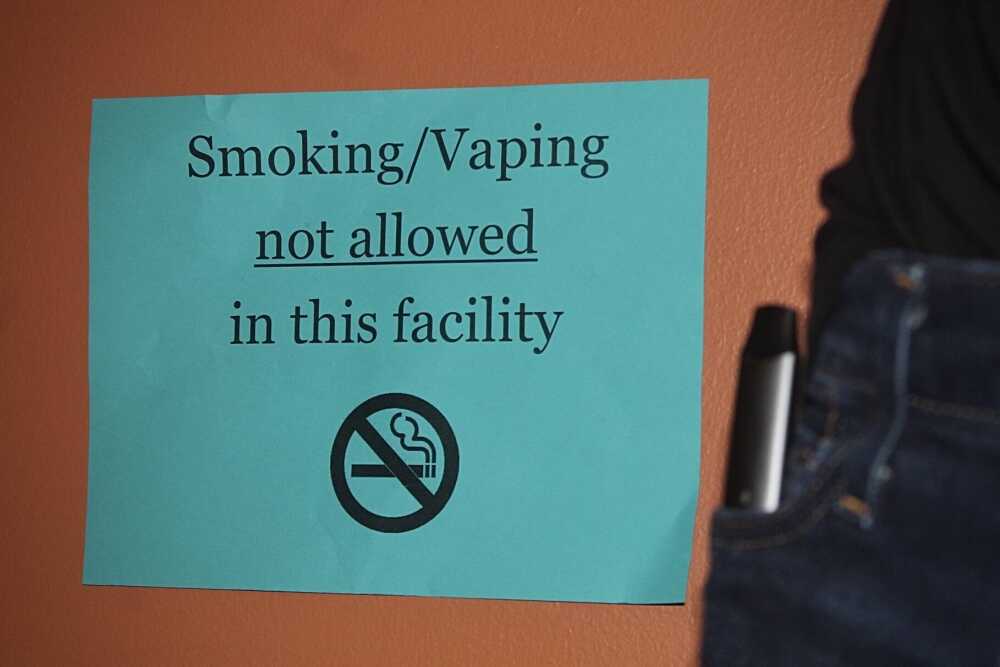 Despite signs around campus stating that there is “no smoking/vaping allowed”, students continue to keep their vapes on them.
Photo by Kerrigan Foster

When people think of the problems college students face, a potentially deadly nicotine addiction likely isn’t one of them. However, with the amount of college students using e-cigarettes today, this problem has become much more commonplace.

According to a study by Statista, “Out of 6,000 college students surveyed, at least 75.7% of them have used e-cigarettes or other vape products” in the past three months.

Rachael Jenkins, family nurse practitioner at the Southeast Campus Health Clinic, said vaping is much more harmful than some may think.

“The effects of vaping are numerous and alarming. E-cigarettes are highly addictive; when inhaled, aerosol is absorbed. The aerosol inhaled contains nicotine, cancer-causing chemicals, heavy metals and flavorings that are linked to serious lung disease.”

Since vaping is a common habit among college students across the country, SEMO has taken measures to limit the number of students vaping on campus. According to the SEMO website, the campus became “smoke-free” in 2017. Unfortunately, this has only partially stopped the issue. Students still continue to vape on campus, despite it being smoke-free.

Junior English major Levi Brandes said he continues to vape because of how often others vape around him.

Senior graphic design major Josephine Harris, who is in the process of quitting vaping, agreed with Brandes.

In addition to the addictive physical aspects of vaping that can be difficult to stop, quitting vaping can also be hard because it requires a change of mindset.

“There has been something in the back of my mind telling me to quit,” Harris said. “I know vaping cannot be good for me. I want to live to grow old; I am thinking about my future.”

The effects of vaping on college students are potentially severe, but vaping has not yet been around long enough to study the long-term effects.

According to an article by The Truth Initiative, “We don’t know much about the health effects of e-cigarettes, meaning the millions of young people who vape are essentially test subjects.”

Jenkins said she is especially conscious of the consequences of vaping, since she works for the Southeast Campus Health Clinic, and urges students to get help if they need it.

“Do not let nicotine use make you feel like a failure,” Jenkins said. “If you need help quitting, there are support apps and websites out there. If you're really struggling to quit, there are medications that [the Southeast Campus Health Clinic] can provide to help you with this journey,” Jenkins said.

For more information on vaping and to get help quitting, you can reach out to the Southeast Health Campus Clinic via email, chc@sehealth.org.