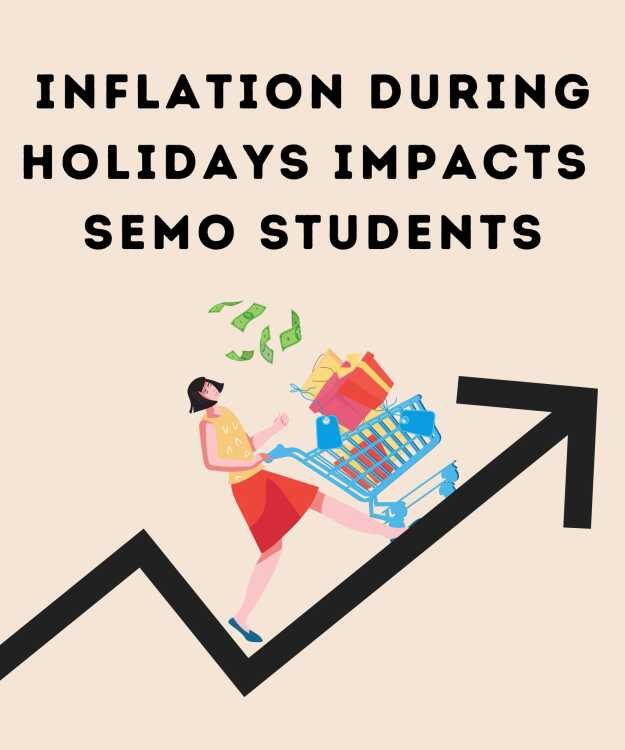 For some SEMO students, inflation impacts their lives, especially during the holiday season. SEMO education major Kaleigh Green said her family holiday gatherings have gotten smaller over the years.

ôWe would have multiple large dinners with the whole family there. But with prices rising in the past few years, it has only been my immediate family,ö Green said.

Green said her family picks out food for dinners based on what everyone wants to eat to avoid spending extra money on food no one likes.

Inflation was at approximately 7.7% by October 2022, according to the U.S. Bureau of Labor Statistics. While this rate is lower than in previous months, the cost of living is still rising. The Consumer Price Index (CPI) calculates the cost of living and measures the average price change for goods and services such as housing, clothing, gas, entertainment and discretionary expenses.

Yaskewich said many stores are starting to extend their reduced holiday season prices due to increased price sensitivity in response to inflation. Price sensitivity, defined by investopedia, is ôthe degree to which demand changes when the cost of a product or service changes.ö Yaskewich said consumers are waiting for deals or looking for deals that start earlier in the shopping season.

Jay B. Knudtson, First Missouri Bankĺs executive vice president, said he is concerned about the inflation rate, which went from approximately 4.9% to 7.7% in the past two years due to $931 billion of government stimulus spending, according to usa.gov.

Knudtson said many consumers do not have cash reserves and use credit cards to assist with holiday shopping.

ôPeople don't seem to ever sacrifice their Christmas gift buying, no matter how challenged their financial situation is. It seems to be a rite of passage or entitlement where they're going to make sure that they still buy all those material items,ö Knudtson said. ôCredit card interest rates have gone up by 300%, and people don't pay them off monthly, so the interest compounds.ö

Knudtson said the rise in increased rates is expected to continue over the next 12 to 24 months.

ôPeople are going to be significantly challenged with both the inflationary rate and the increased interest rates. We have reason to believe there's going to be a real downward trend in people's ability to pay their bills,ö Knudtson said. ôCandidly, people will get through this holiday season, even with the high inflation. But then it will be the first and second quarters when credit card statements come in. We anticipate some real challenging times for individuals, families and businesses in 2023.ö

Knudtson advises consumers to save for a ôrainy day.ö He said American culture is often based around living for the moment.

ôIf people want a new car, they go buy a car. If they want a bigger home, they go buy a bigger home. And all that works as long as they're working, income is steady and continues to come in. If consumers get sick, get divorced or lose their job, then people are severely impacted by that [loss of income],ö Knudtson said.

Knudtson predicts inflation could rise to 9% in the next year.

For more information on the current rates of inflation, visit the U.S. Bureau of Labor Statistics website.