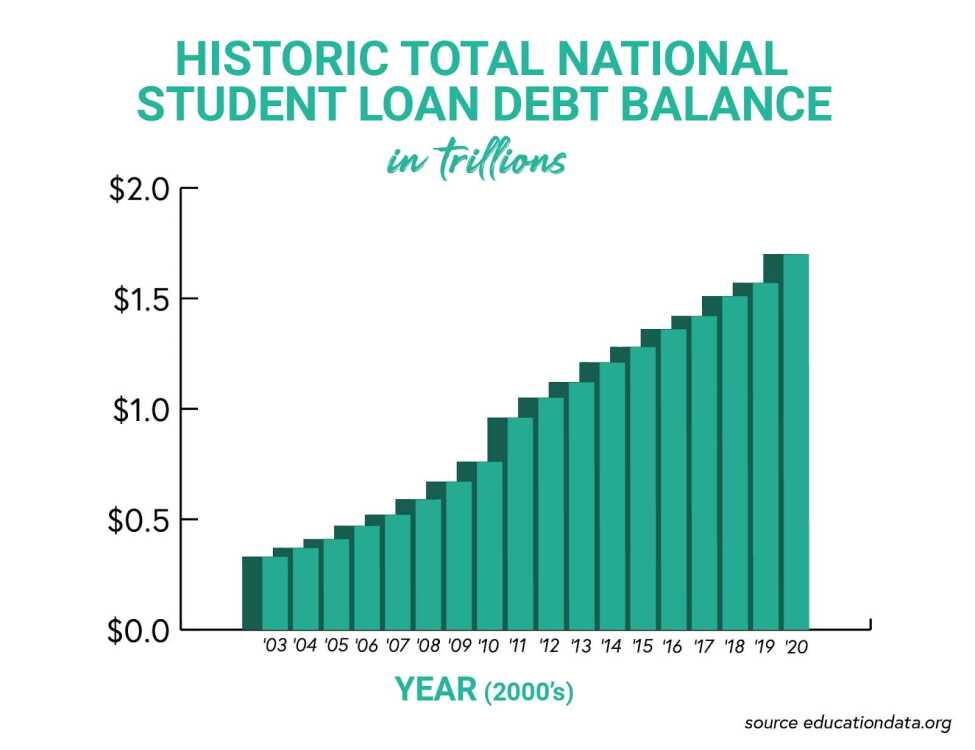 In 2020, the total student loan debt in the United States exceeded $1.7 trillion for the first time ever. For comparison, the U.S. military budget in 2020 was $714 billion.

Nearly 45 million Americans have incurred a part of that student loan debt — for each of these individuals, this puts the average debt at just under $38,000. For many, these numbers can be shocking to think about and are why the issue of student loans is a prominent one seemingly every national election year.

During President Joe Biden’s 2020 campaign, Biden used widespread student loan forgiveness as one of his most prominent campaign platforms. This included either eliminating $10,000 for each person or full forgiveness for graduates making less than $125,000 per year. Biden has already cancelled $2.3 billion in student loan debt for 113,000 people, but his plan for more widespread forgiveness is stuck in Congress. Limited by the ability of executive orders, Biden must rely on Congress to pass legislation on forgiveness, a process that has not progressed since Biden’s inauguration in January.

If Biden’s plan to cancel student loans eventually goes through, it would affect only federal loans.

In March 2020, the U.S. Department of Education began providing relief for student borrowers in response to the pandemic. This included suspension of loan payments, stopped collections on defaulted loans and a pause on interest. Those benefits have been extended through at least Sept. 30 of this year. Alumnus James Vance said the relief helped him pay off $9,000 in federal loans between August and February.

“With COVID, a bunch of student loans were deferred, so I was able to just make payments on the principal balance,” Vance said. “As soon as I got paid, I instantly paid it off because there was no interest.”

According to studentaid.gov, federal loans typically have more benefits like deferment than private or bank loans. These can include payment balances that are due only after graduation, fixed interest rates, subsidies while in school, no credit checks, loan consolidation and possible forgiveness.

Southeast’s website explicitly states private/alternative loans “should be used as a last resort,” because not every private loan has the benefits every federal loan does.

Matthew Kearney, director of Student Financial Services (SFS), said SEMO students don’t deal with many private loans because tuition at Southeast is lower than some other four-year institutions.

“In a lot of cases, federal student loans and other aid [students] are eligible for is enough to cover the vast majority of their expenses,” Kearney said.

With some federal loans, students don’t have to start paying them back until after graduation, and interest does not begin adding up until that point, too. But when interest starts kicking in, it kicks in hard.

Kearney said federal student loans typically have a lower interest rate than other types of loans, but the interest can still add up fast — or slow, depending on how you look at it. Student loans usually have a 10-year payment plan, and over that time, interest is added daily. Kearney said it’s not uncommon to see a $10,000 loan balloon to $20,000 over time. As the loan gets higher and higher, the interest becomes tougher to pay, and so on and so forth.

Kearney said there are some ways to combat growing loans. The first is consolidation, which works for people with multiple loans. Many loans have different interest rates, and if someone has multiple loans through one lender, they can consolidate them into one loan with a favorable interest rate.

As mentioned earlier, loan forgiveness is a possibility for certain people, but Kearney said it’s important to remember not everyone is eligible.

“The downside of these loan forgiveness programs is there’s a lot of things you have to do to be eligible, and you have to continue to do those things to even stay eligible,” Kearney said. “You don’t want to [get kicked out of the program], because you’ll still have to pay interest on all that stuff that was being forgiven for a while.”

Lastly, Kearney said it is important to research the amount of money in loans you need and to know what type of commitment a 10-year payment plan actually is. He said students will often take out a loan and forget about it because interest doesn’t kick in for five years.

Kearney said a common occurrence when students approach SFS for help is that they “don’t know anything about repayment of loans,” so it’s important to keep payment plans in mind and begin planning further once a career path is decided upon.

So does a university’s tuition have an impact on student loans, or vice-versa? William Weber, professor of economics, said some universities raise tuition in response to students qualifying for more money, essentially because the school then has the ability to charge more.

Weber said many of the students who are unable to pay off debt are those who major in areas with low-paying jobs or scarce job markets.

To combat this, Southeast has a system in place to review its programs called Academic Prioritization. In this process, degrees are reviewed for productivity, and one of the criteria is contribution to workforce development. “The major prepares graduates that are valuable and needed by industry, business and other stakeholders in Missouri,” is Southeast’s definition of contributing to workforce development.

If a degree can’t meet that and eight other criteria, the program could be recommended for enhancement, transformation or deletion. In December, the Board of Regents recommended 27 majors and 27 minors for changes or deletion. The process occurs at least once every five years.

Sue Wilde, director of the budget office, said every division on campus is required to cut their budget by 12.5% because of decreased enrollment and state appropriations. These cuts are a three year effort by the university expected to be finished in 2022.

“That’s a pretty significant cut, so one of the ways Academic Affairs is [making cuts] is by Academic Prioritization, so they can see where they need to reinvest resources or where they can cut resources,” Wilde said.

If any Southeast student is unsure about taking out student loans or repaying them, they can contact SFS with any questions.